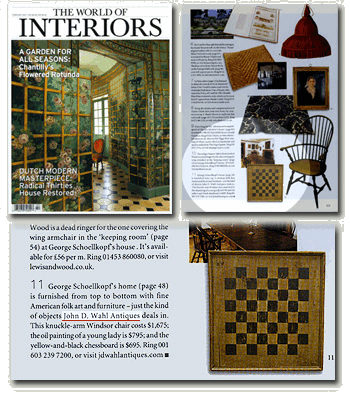 JD Wahl Antiques – Focused on 19th Century American Antiques was featured in the February Issue of The World of Interiors Magazine. Some of the antiques featured included an oil on canvas, which was featured on the Inspirations page. As well as a 19th century antique painted game board and a knuckle arm Windsor chair.

As a dealer in 19th Century antiques, located in a small town in New Hampshire, JD Wahl Antiques has become a known entity in the 19th Century Antique Dealer community.

Danny say’s, “Between day to day business and holiday preparations the request and the photos were forgotten.” … “I was somewhat surprised when we received another call from England. It was in early January and someone was asking if the painting that I’d advertised was still available. There was a moment of confusion as I didn’t have any ads currently running and certainly not in England, but I put two and two together when the caller explained that he’d just received the February issue of The World of Interiors. We were delighted when they wanted to purchase the 19th century antique oil on canvas that was featured on the Inspirations page.”
Being a 19th Century American Antiques dealer featured in The World of Interiors has sure changed things for us. Since that day in January, all of the items that were featured in The World of Interiors magazine have been sold.

Thank You World of Interiors Magazine!